You can call me Moke 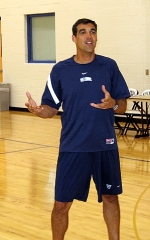 Well, actually only Villanova Coach Jay Wright can call me Moke. I sent an email to Jay on friday pointing out that if he decides to recruit Seattle Tony Wroten Jr. (who hasd ‘Nova in his top list), that I would help give him the lay of the land in Seattle since it is out of his usual territory.

His Reply began with Moke… ah, but look at the keyboard- the I is next to the O. Usually I’d get mad, but hey this is Jay we’re talking about here.

He gets a pass.

Those soles are well-loved.